Your Browser is not Supported.

We recommend the latest version of Safari, Firefox, Chrome, or Microsoft Edge.

We’re thrilled to be kicking off 2022 with a book announcement and cover reveal! If you love animated films, you won’t want to miss the forthcoming memoir by Don Bluth. Somewhere Out There: My Animated Life will hit bookshelves on July 19. 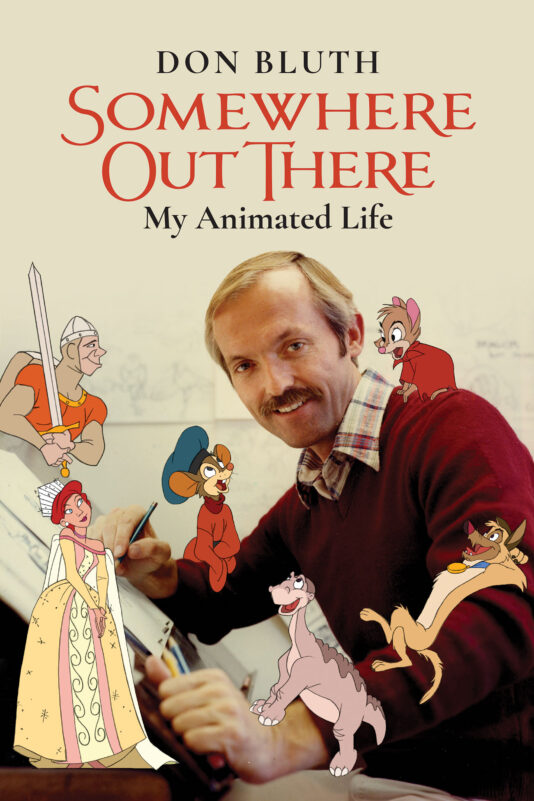 After more than five decades in Hollywood, Don Bluth, the man behind some of the most iconic animated films ever made, tells his story.

Don Bluth never felt like a Donald. So people have always called him  Don. A matinee of Snow White and the Seven Dwarfs awakened something within him. Despite growing up in rural Texas and Utah, he practiced and worked hard to become an Hollywood animator. And after working alongside his idol Walt Disney, and on films including Sleeping Beauty, The Sword in the Stone, Robin Hood, Winnie the Pooh, The Rescuers, and Pete’s Dragon, he realized that the company had changed into something he didn’t necessarily believe in. So made the industry-shocking decision to start his own animation studio.

It was from that studio—Don’s studio—that came such award-winning, generation-defining films as The Secret of N.I.M.H, An American Tail, The Land Before Time, All Dogs Go to Heaven, Anastasia, and the video game Dragon’s Lair.

Now, after more than half a century in the movie business, Don is ready to tell the story of his life. How his passions for artistry, integrity, and his Mormon faith shaped him into the beloved icon whose creativity, entrepreneurship, and deeply-held beliefs entertained, enthralled, and inspired millions across the globe.

Exclusive original art makes this book perfect for fans, cineasts, and anyone looking “somewhere out there” for inspiration and motivation.

Somewhere Out There is now available for pre-order wherever books are sold, including from the following vendors:

What Don Bluth film is your favorite?

Tell us in the comments below!

We use cookies on our website to give you the most relevant experience by remembering your preferences and repeat visits. By clicking “Accept”, you consent to the use of ALL the cookies. However you may visit Cookie Settings to provide a controlled consent.
No, AdjustAccept All
Cookie Settings

Analytics
Analytical cookies are used to understand how visitors interact with the website. These cookies help provide information on metrics the number of visitors, bounce rate, traffic source, etc.
Advertisement
Advertisement cookies are used to provide visitors with relevant ads and marketing campaigns. These cookies track visitors across websites and collect information to provide customized ads.
Save & Accept

Get the latest news, updates, and special offers delivered to your inbox.